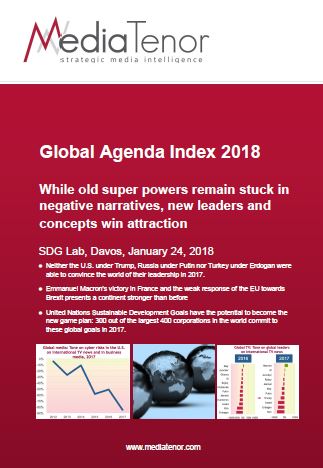 Benefits of registering
Registration on the Media Tenor website provides you with free access to our restricted archive of case-studies, reports and newsletters. You can also elect to receive our regular newsletters on a variety of media related issues.

Zurich, March 13 2014: The NSA scandal and several high-profile data breaches in 2013 have put Cyber risks on the global media agenda and are a threat to corporate reputation. This shows an analysis of the media image of companies and industries related to Cyber issues by the Swiss-based Media Tenor research institute and Awareness Metrics, it’s risk management platform.

“The theft of millions of credit and debit card numbers at Target Corp has been highly visible on TV news and in opinion-leading media like the Wall Street Journal”, explains Matthias Vollbracht, Managing Director of Awareness Metrics. “According to U.S. media sources the impact has been visible in sales”.

A detailed analysis of 54 international TV news shows and print media from Europe, Asia, North America and Africa between March 2013 and February 2014 displays that retail, telecommunication, IT and web service firms and the financial sector were most exposed to negative publicity on Cyber risks. “The increased discussion about data security is also a potential threat to the business models of Google, Yahoo, Facebook and Apple”, says Vollbracht. However, companies like Deutsche Telekom have attracted positive coverage on providing security solutions.

An Awareness Metrics analysis of cyber breaches based on data from Emerging Technologies Group a US-based professional service provider, indicates that 73 per cent of all data breaches are linked with reputational damage and nearly half of all breaches find their ways into the media.

For this study Media Tenor has analyzed 120,375 reports about companies, industries and managers in 54 media from Spain, France, Italy, Germany, the U.K., the U.S., South Africa, Vietnam, China, Germany and Austria. The average inter-coder reliability in the 4th quarter of 2013 was 86.38 %.

Chart of the week